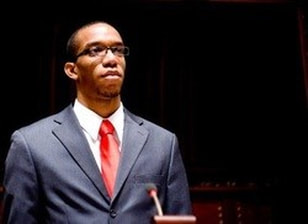 Joshua Mbanusi '12
Founding
Joshua Mbanusi founded Scholars Working Ambitiously to Graduate (S.W.A.G) in 2011 after reading an article in the Cornell Daily Sun that mentioned that Black males have the lowest graduation and retention rate at Cornell in comparison with other demographics on campus.

​Joshua worked with members of Black Students United to create the framework for S.W.A.G and won a $5000 Pepsi Grant to finance it through its first year. He collaborated with members in the Cornell administration and a vast array of stakeholders at Cornell including BSU; LINK: Black and Latino Men's Alliance; Men of Color Council; Alpha Phi Alpha Fraternity, Incorporated; Phi Beta Sigma Fraternity, Incorporated; Iota Phi Theta Fraternity, Incorporated.
​
At the time, Joshua attributed the low graduation rate to university-wide "structural" factors such as limited institutional support and a weak sense of community among Black men on campus.
Mission
The mission of S.W.A.G is to increase retention and graduation rates primarily among Black men at Cornell University. Achieving this goal through: Our vision is to play a pivotal role in the increase of the black male graduation rate at Cornell every year, and to see it increase every year. We hope that we will be on par with the other racial demographics on campus, strengthen our campus’s community of Black men by fostering a collaborative and supportive environment, and consequently promoting the highest levels of educational attainment on campus. We want to make sure SWAG men are not only graduating, but are excelling, thriving, and serving as models of success during their collegiate careers and beyond.
Powered by